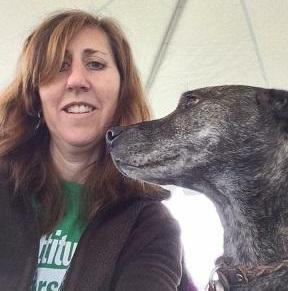 Barbara Eget has been a volunteer with Attitudes in Reverse (AIR) nearly since the beginning.
Barbara, whose older son has bi-polar disorder, first met Tricia Baker in a support group for mothers of children with mental health concerns. In 2010, Tricia founded AIR to raise awareness about mental health.
“I knew I wanted to be part of that,” said Barbara, who has been an active AIR Dogs: Paws for Minds therapy team with Shasta since 2013, when she and Shasta took therapy dog classes with Tricia and became dog therapy certified.
“Shasta is one of those once in a lifetime dogs, I just fell in love with her picture that a friend sent me and something in her eyes just spoke to me,” said Barbara, of Shasta, then almost 5 years old and suffering from heartworm, when she was surrendered to a shelter in Georgia.
“I found out she literally had 24 hours left to live,” she said. “I saved her life and she’s in turn saving human lives through AIR.”
“I feel very comfortable talking to the youth and letting them know that it’s ok to ask for help,” she said. Sometimes that’s really all they need is permission and the dogs make that easier because the students are at ease being around the dogs. They can let their guard down.”
As one of AIR’s initial therapy teams, Barbara remembers the first visit for her — and for Shasta. The AIR teams went to West Windsor Plainsboro High School North during lunch, the busiest time at the school to de-stress students during AP testing. 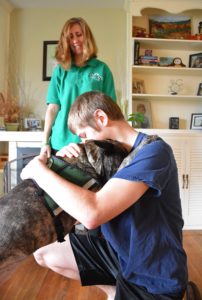 “It was such a chaotic time of day and I was just so proud of how she did,” Barbara said. “She handled it with grace and it didn’t seem to phase her.”
Shasta’s career as a therapy dog began at home. Shasta was a natural at reading emotions with Barbara’s son, Davin.
“I noticed Shasta was great therapy for him,” said Barbara, a Massachusetts native who has lived in southern NJ the past 26 years. “I could sense that she was noticing when he needed her to be close. She was in tune with his feelings.”
This canine intuition is what has made Shasta such an incredible AIR therapy dog for the past 6 years. Sadly for AIR, Shasta will be retiring at the end of this school year, as she turns 13 years old.
While Shasta still really loves AIR visits, especially with college students, Barbara wanted to retire her so she can just enjoy time with family.
Shasta shares her home with Barbara’s husband and two sons, a Chihuahua mix, four chickens and a pot-bellied pig named Miss Piggy Pigalicious. Shasta loves hiking with Barbara, so there will be more time for that in retirement.
Barbara is a very active volunteer with the Cub and Boy Scouts in her town. She also is active with NAMI Mercer, where she facilitates a support group for parents of children with mental health concerns through the Youth Mental Health Project’s Parent Support Network. She also helps run her school district’s special education parent advisory group. Even though Shasta is retiring,
As a newly appointed Advisory Board member, Barbara plans to remain active with AIR and hopes to train another therapy dog in the future.