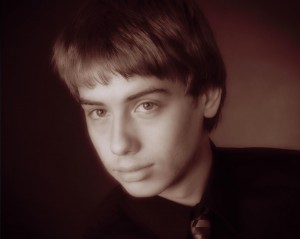 Kenny Baker was a kind-hearted young man who any parent would be proud of. In spite of his dyslexia, he was a math honor student. He was brilliant…when tested at the age of six, he was found to have the long-term memory of a 29-year-old. He was a star swimmer on two swim teams. Kenny was a lifeguard at the local YWCA for more than four years. He had many friends, as he was respectful to all people: peers, teachers and other adults. He was a good listener. He had a girlfriend. Everybody loved Kenny.

At the age of 15 years old when he was diagnosed with depression, the bottom dropped out of his world. Within a year, he was also diagnosed with a severe anxiety disorder. Kenny was embarrassed by his illness and told most people that he had mono for more than three years. His illness prevented him from attending the local high school, so many friends drifted away. Kenny found some public educators did not understand his illness, or side effects from the medications, and said mean, hurtful things to him. No one chooses to have a mental health disorder and no one can “just snap out of it”.

Kenny bravely battled against his illness, He was compliant with doctors, following all forms of treatment. Kenny was in emotional and physical pain. Kenny battled his “invisible illness”, as well as the stigma of this illness. At the age of 19, just three weeks before graduation from high school, the pain was too great. On May 19, 2009, Kenny ended his pain and ended his life.

Sadly, the discrimination continued after his death. At that time, the administration of the local high school believed that suicide was about “looking for attention”, and as a result, fewer than 10 staff from the high school attended Kenny’s wake and funeral. The school administration suggested that Kenny’s photo be covered by a sticker in the 1,500 yearbooks to be distributed that year, basically erasing Kenny’s memory and denying the existence of mental health disorders in the high school. Each day, Kenny’s sister, Katelyn, had to battle this discrimination, as she was only a sophomore in that high school when Kenny died.

From this discrimination, AIR™ was born. The concept of AIR was Katelyn’s. She said, “Mental illness is like air. Just because you don’t see it, it doesn’t mean it isn’t there. It is all around us.” For her concept, the New Jersey Governor’s Council on Mental Health Stigma awarded Katelyn a 2010 NJ Governor’s Ambassador Award.

We are happy to report that AIR’s continued communication with this high school has brought about an important change. In April 2011, Katelyn and her good friend, Nick, who also lost a brother to suicide, presented to 410 Juniors in that high school. Of those 410 students, 18 went looking for help. AIR has been invited back to speak in May 2012 to educate the current Junior class about mental health and suicide prevention. Over the next three years, AIR has presented to more than 6,000 additional students at this high school, in addition to more than 30,000 students at other middle and high schools, as well as colleges and universities, throughout New Jersey,and in seven other states across the nation. Since November 2015, AIR has launched chapters in California, Arizona and Minnesota through support from actors, crew members and fans of the popular television program Supernatural, and plans to establish chapters in other states in the near future.

AIR’s mission is to educate about mental health disorders, to prevent suicides, but just as important is to educate so that no one is misjudged or criticized because they have a biological-based brain illness. All people, no matter what their differences, should be treated with respect and kindness.

Miki, AIR Co-Founder Tricia Baker’s Service Dog, has accompanied the Bakers to every community event where the family exhibited to Start THE Conversation, Reverse Attitudes and Save Lives. It immediately became apparent that Miki broke down barriers to communication about the sensitive topics of mental health disorders and suicide, as he clearly captured people’s attention and after engaging in conversation, at least 90 percent of the visitors shared their own or their family members’ experiences with mental health disorders. This naturally led to Miki and other Service Dogs becoming integral parts of AIR and its programs.

Kenny was a kind, thoughtful, quiet soul, who always put others before himself. There were many times, during his hospitalizations, he would give other kids his clothes, because they would have no more than the clothes on their backs. We want to continue to help others, doing work that would make Kenny proud of us.