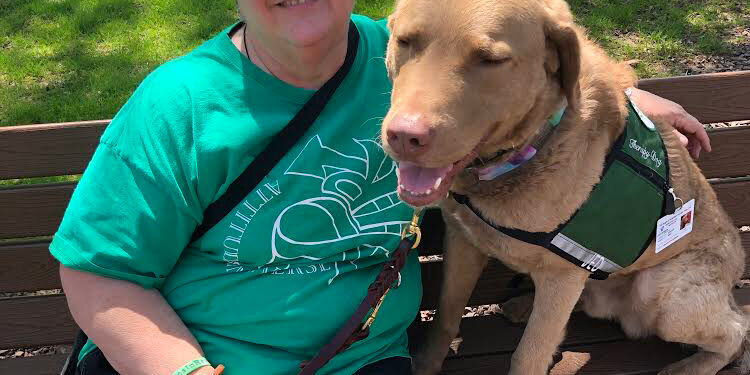 Linda Hobson has owned five therapy dogs over the years and has been an AIR Dogs: Paws for Minds Therapy volunteer for Attitudes in Reverse since 2011.
“I just enjoy seeing the young people let their guard down,” said Linda. “ You can watch their whole body language change. They just melt.”
Linda first met AIR co-founder Tricia Baker before AIR’s inception, when Tricia hired her as her dog trainer. Linda, a lifelong Hamilton resident, has been a professional dog trainer since 1988.
They met again in 2010, shortly after Linda’s nephew,  Scottie, died from an accidental drug overdose and she learned of AIR and its mission.
“I learned there can be a connection between mental illness and drug/alcohol addiction,” said Linda. “It’s a parallel universe.”
Linda volunteers with two AIR therapy dogs, Emmett, an 11-year-old Chihuahua/Dachshund mix, and Jed, a Chesapeake Bay Retriever who turns 5 this July.
Emmett was in a shelter where she was volunteering and Linda took the 10-month-old home to foster. Jed was returned to a breeder at 5 months old and waiting for a new forever home. When Linda started to look for another dog to add to the family, she heard of Jed, about 1 year old at that time, who was available. “It was love at first sight,” she recalled.
“I wasn’t sure Jed could become a therapy dog,” said Linda, because he used to be fearful of loud noises. Their bond is so close, she said, that Jed can adapt to new situations.
“We talk to each other,” she said. “We had our first college visit at Mercer County Community College last year and there was this machine banging. I said to him ‘We’ve got this and if you’re uncomfortable, we’ll leave.’”
“He got up on a bench and was fine,” Linda continued. “We had a great visit.”
Linda’s motto is “the fur is free,” and she and her dogs freely share during AIR visits as well as for the Rescue Mission of Trenton and Nar-Anon.
“I’ve lost people to addiction,” said Linda. “I can’t bring them back but volunteering is my way of giving back.”
“When people see Jed they start to let down their wall,” she said. “At least a few of the bricks.”