AIR’s Mission Extends to All Populations, including Active-Duty Military and Veterans

Since record-keeping on suicide among active-duty military members and veterans began after 9/11, the rate has been increasing over the past five years at an alarmingly steady pace and reached an all-time high in September 2021. More than 30,000 active-duty personnel and veterans who served in the military after 9/11 have died by suicide. This rate is four times higher than deaths that occurred during military operations: 7,057 service members lost their lives in combat during the same 20-year period.

In recognition and gratitude for the dedication of the military and the ultimate sacrifice that many of them make to protect the U.S. and its citizens, AIR proudly AIR participated in the Mercer County Veterans Association’s Veterans Day Ceremony and Celebration on Nov. 7th at the Mercer County Office Park Gym.
AIR sends a BIG thank you to Harvey Walker for coordinating this introduction. As a veteran himself, he sees the need for mental health and suicide prevention education. This event was an important outreach opportunity, as AIR wants to provide additional support to the many veterans who are struggling.
AIR Sends Infinite Gratitude to Current Military Personnel and Veterans for their Service and Sacrifices 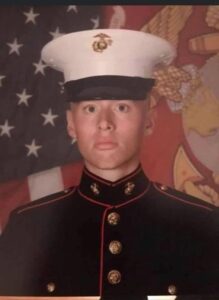 Steven Schiff, son of AIR Board member Patti Betz, who is currently serving with the US Marine Corps. 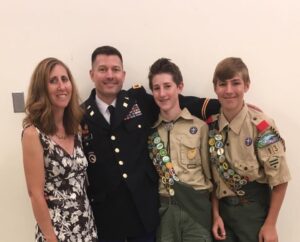 Left to right, are long-time AIR Volunteer Barbara Eget with her husband Jeff and their sons Conall and Davin.