PRINCETON, NEW JERSEY (September 22, 2017) – Everyone knows that people smile when they pet dogs. What might be less known is that people also experience biochemical reactions: release of “feel good” brain chemicals and a reduction of a stress hormone. Dogs offer even greater health benefits when they are trained to serve as Emotional Support Animals (ESAs). To give more people opportunities to gain these health benefits, Attitudes In Reverse® (AIR™) now offers training and certification of ESAs.

ESAs Provide Support and Comfort for Individuals with Disabilities

“ESAs provide emotional comfort and support to their owners. They are often key companions for individuals who suffer with mental health disorders, such as anxiety and depression, or other types of disabilities,” said Tricia Baker, Co-Founder of AIR and one of only 2,000 Certified Professional Dog Trainers-Knowledge Assessed in the nation. “Actually, all kinds of animal can be ESAs, as long as they have the right temperament, provide emotional support and have documentation from the person’s doctor stating that the animal helps minimize the person’s disability,” she added.

AIR offers the training and certification as part of its mission to save lives by helping people understand, cope with and seek help for mental health disorders. Training classes are held in New Brunswick, NJ.

“I know from personal experience the value of having a dog – actually multiple dogs – in my life. After losing my son to suicide eight years ago, my service dog Miki made sure I got out of bed each day. Miki continues to comfort and support me through the ongoing emotions related to my son’s death, as well as other situations that could arise any day,” Baker said. “Miki is also a therapy dog and accompanies me to most of my AIR educational presentations, so students can benefit from his presence, as well.”

Alexander Derkatsch recently had his dog Apollo certified as an ESA. Apollo is named after the Greek god of the sun because “he brings light into our lives,” he said. Alexi has had Apollo for about eight years and while the Golden Retriever has completed basic training and has been highly therapeutic for Alexi, who is coping with mental health challenges, both the dog and his owner have gained even more benefits from AIR’s ESA training and certification program.

Earlier this year, Alexi’s therapist recommended that he and Apollo participate in the AIR training course, which provides a higher level of training so Alexi could gain additional benefits of having a dog. For example, Apollo can now be with Alexi on an airplane, rather than in a crate with the luggage.

Alexi and Apollo completed the six-week training in the summer. “Tricia and the training she provided are amazing,” Alexi said.

Alexi and Apollo recently flew to California, where Alexi is attending California Polytechnic State University. During previous semesters, Apollo stayed with Alexi’s mom in New Jersey, and Alexi was not able to gain the mental health support he needed.

“I don’t think it will be difficult to have Apollo with me out there. It will be the opposite. He’s going to be this factor of relief throughout my day,” Alexi said. “Just the fact that he’s there gives me many advantages. The chore of having to take him for walks is a blessing. It makes me able to face the outdoors. I may be able to share a smile or passing gaze with someone and pay it forward in some small way.”

To be certified as an ESA, the dog needs to pass the Canine Good Citizen test, which demonstrates the dog’s ability to be well behaved anywhere in a community, and the Therapy Dog test, through which the dog shows continued focus on his owner despite sounds and objects that would other-wise compete for his attention. 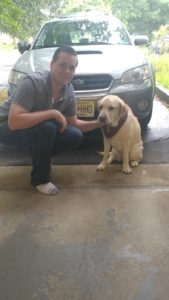 Anthony Montes Comes Out of the Darkness
August 8, 2021
Upcoming Events