In Their Shoes Exhibit Coming to Hudson County Community College 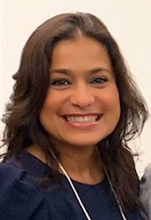 Assemblywoman Annette Chaparro will be attending AIR’s powerful In Their Shoes exhibit at Hudson County Community College tomorrow. The exhibit consists of shoes that represent New Jersey youth, ages 10 through 24, who lost all hope and ended their lives by suicide.
“Mental health is important and we have to take the stigma away from mental health issues,” said Chaparro, who represents the 33rd Legislative District, which includes the college. “I’m happy that AIR is going to be in Hudson County. We have so many young people in such a condensed area.”
“I’m hoping that we are letting kids know that talking about mental health can be as easygoing as watching TikTok,” she continued. “I want kids to feel comfortable talking about mental health. We have to be able to talk about it and show that it’s cool to talk about it. However, we also have to keep people’s culture in mind.”
Chaparro recalled her own childhood, living in the Hoboken Housing Authority and attending Hoboken High School.
“The word depression never came up when I was a kid,” she said. “It was just never a topic. It was a stigma – you were a punk if you talked about your feelings. I would always put a smile on my face as a kid and ignore the hard things.”
As an adult, Chaparro recognizes the need to deal with her own stress and insecurities.
“Smiling and laughing was a way for me to pretend life was good. I was able to keep moving forward instead of curling into a ball,” she said. “But I was just masking the problems. Becoming a legislator saved me in a lot of ways. It made me confront things. I really do want to make a difference.”
Chaparro said she enjoys the outdoors and tries to spend time outside, sometimes jogging along the waterfront, to manage stress.
“I feel like I start to think and process things better,” she said. “I also try to be silent and just keep saying to myself ‘It’s not as bad as you think it is,’ and try to go back at the problem again. “I’m still growing and learning, but I really need to help people that are struggling and mental health is huge.”
Mental health is among the key concerns of Chaparro, who met AIR Co-Founder Tricia Baker at a mental health roundtable.
“We all deal with things in our own lives and we feel like we’re alone at times,” she said. “Tricia is remarkable, I was blown away by her strength and her passion. I wanted to be part of it. Our children need this, especially now.” 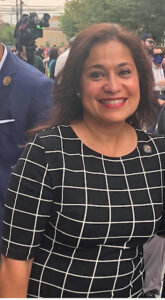 Chaparro said she is excited to be a part of tomorrow’s event and plans to donate a pair of black pumps to the In Their Shoes™ VIP exhibit, which includes shoes from various celebrities and public figures with inspirational quotes.
“I love these shoes, I thought they were so cute,” she said. “I picked them because I’ve worn them so much. They’re a reflection of my life – They look good but they’re not the most comfortable. But I wore them because they’re pumps and that’s what I thought was expected of me to wear in public.”
“In life you have to learn not to want to be someone else,” she continued. “You are an individual. It’s important to be yourself. You can make changes but you have to let go of the past to make changes.”