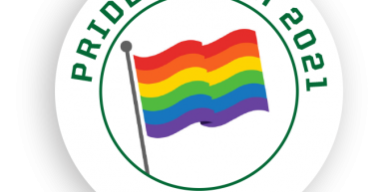 Based on the interviews AIR conducted recently with individuals in the lesbian, gay, bisexual, transgender and queer and questioning (LGBTQ) community, it seems to be a trend for individuals who struggle with their gender or sexual identity to start coming to terms with it during college where they find a more accepting culture. However, the West Windsor-Plainsboro (WW-P) Regional School District appears to be one of the exceptions as the schools host Gay Straight Alliance (GSA) groups and has both staff and students who are open about their identities and preferences. This is very encouraging for the progress that society overall still needs to achieve.

Even in a more accepting and supportive environment, it can still be “hard for youth today to go through the teen years because they don’t have experiences to lean into, to know things will get better,” said Justin Dolcimascolo, facilitator of the PRISM (Performance Revealing Individual Students’ Magic) program and co-advisor of Spectrum (GSA) at Thomas R. Grover Middle School. “In the sixth through eighth grades, kids start to really think about who they are.”

Justin recommends that students be true to who they know they are and realize that this may change. “Live in the moment and in the idea that you’re growing. Find the joy of who you are, find the people who value who you are and spend as much time as you can with them,” he advises.

Justin recognized that he was gay when he was in middle school. “I was involved in sports so at the time, I couldn’t make amends with the homophobic aspect of sports and didn’t’ know how to deal with the feelings. So, I withdrew from sports and I felt invisible, very withdrawn. In eighth grade, I received the most popular/most school spirit award, but I was the total opposite by the time I got to college in the early 1990s,” he recalled.

“Be true to who you know you are, which may change. Live in the moment.”
— Justin Dolcimascolo

“I always had a silver lining thought process. At my core is the belief that great things will come out of the struggle. I hold on to the idea that I’ve been through this challenge and I built up muscle memory to get through other challenges,” Jason said, adding that he has been fortunate to have a support system with family and friends. “I’ve never been suicidal, but sometimes, I just didn’t want to feel. I had depression and my support system and muscle memory got me past it. What doesn’t kill you makes you stronger.”
Justin was fortunate to connect with a dorm mate during his sophomore year in college who helped in verbalize his attraction to other men. “He asked the question and it felt good to speak about it. I then found a group of people I was comfortable with,” Justin shared.

“At my core is the belief that great things will come out of the struggle. Build muscle memory to get past it.”
— Justin Dolcimascolo

When he started work as an elementary school teacher in his early 20s, he basically went back in the closet. “I made sure that my teaching and reputation were impeccable before I came out,” he said.

“I’m fully out now at school. It’s much easier in an environment where the default thought process is that you’re straight and when they find out you’re not, there’s more understanding and acceptance. We’re farther than we were in the ‘90s, but there’s still a lot more work to be done,” he added.

Justin previously taught at Millstone Elementary School, where he met Rebecca McLelland-Crawley, who facilitates the gifted and talented program (similar to PRISM) at Community Middle School (CMS). He learned about AIR during a health fair at CMS that was hosted by NuYu, a student group focused on mental health that Rebecca leads. AIR was an exhibitor at the event – with dogs, of course. “I saw firsthand the work the organization does, the beauty of the visceral feeling of calm that the dogs bring and the overall impact and value of resources,” Justin said.

When everything went virtual, AIR Co-founder Tricia Baker reached out to Justin about holding virtual dog visits every week during the coronavirus pandemic. “It was great to see students smile from seeing dogs on their monitors,” Justin said.

“What AIR is doing is tremendous. AIR speaks to the value of bringing awareness of mental health to different sections of society and brings space for students to realize it’s ok to not be ok and they’re not alone. This is critical for any marginalized group, who feel invisible, that they have no one to talk to,” he added.

“When you read a book, you see yourself in it or have a window into someone else’s life. AIR provides those windows or mirrors for students to say, ‘That’s me,’ and they realize they have someone to speak to about their struggles,” Justin said. 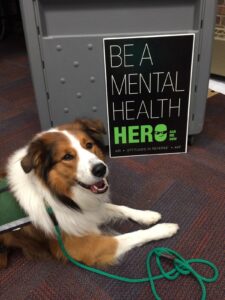