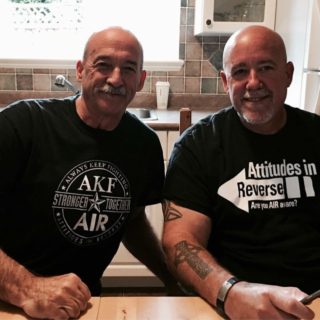 In 2013, brother Mitch and Clif Kosterman established TwoSharks Media. Their first project was the Supernatural Fandom movie, which features the cast and crew of the popular hit TV series, Supernatural. Both Kosterman brothers knew the importance of starting the conversation about good mental health and included AIR Co-Founder Tricia Baker.

Cliff, who was an actor and now serves as bodyguard for Supernatural stars Jared Padalecki and Jensen Ackles, developed the concept for the Supernatural Fandom movie and did so much work to get the project off the ground. He continues to provide valuable support as a Producer throughout the project.

Mitch was also an actor in film and TV, as well as a writer, producer and director for about 30 years. He wrote and directed the Supernatural lFandom movie, in addition to shooting most of the footage and producing in partnership with Clif.

We, at Attitudes In Reverse, are eternally grateful for their continued support in AIR’s mission of saving young lives.